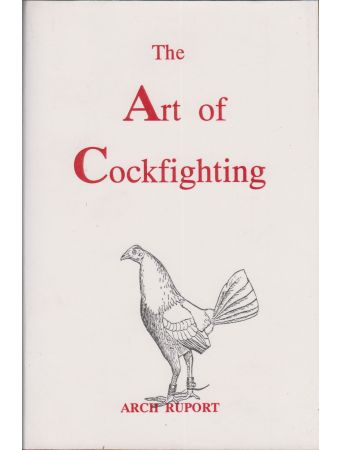 THE ART OF COCKFIGHTING: A HANDBOOK FOR BEGINNERS AND OLD TIMERS. By Arch Ruport (Muff).

"This is the story of Cockfighting and how it is practised in certain parts of the World where it is still legal. In Britain it has been a forbidden sport for more than 150 years, although it is said that in certain country parts, that it ceased much later than that time. Many people keep Game Fowl purely for interest and this book is reissued in the hope that many of the sections relating to the history, feeding, conditioning and other aspects of keeping these birds will be of great interest." Originally published in America in 1949. This edition, in common with other Beech Publishing books is not a very handsome production. Contents include:- Introduction by D. Henry Wortham; Preface by Bayard Tuckerman, Jr; History; Selection of a strain - basic strains - the hen; Breeding and breeding systems; The house; Caring for brood fowl; Rearing game chickens - stages in the life history of a gamecock; Dubbing stags; The farm walk; Coop walks - movable and stationary; Getting ready for battle; Trimming out for battle; Six good keeps; Condition powder and drugs; Tools of the trade; Gaffs; Heeling cocks for battle; In the pit; Handling and nursing in the pit; The referee; After the battle; Methods of conducting cockfights; Construction and operation of a pit - the portable cockpit; A healthy environment; Game fowl diseases and treatment; Some do's and don'ts for cockers. Appendices include:- The Rules - McCall's rules (revised); D. Henry Wortham's modern tournament and derby rules (revised); Commonsense rules of the cockpit; Comments on the law; Glossary of game fowl colors; Magazines and books devoted to cocking; Glossary of cocking terms; Remedies - commonsense and practical.
£30.00
Availability: In stock
Book Code
47547
Add to Wish List Add to Compare
More Information