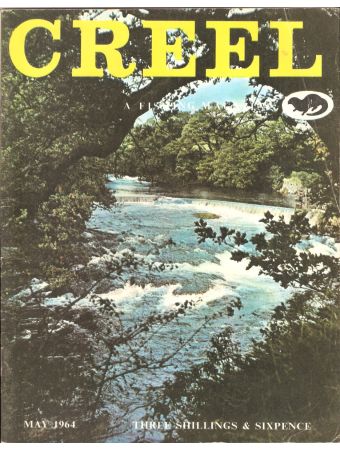 Founded and originally edited by Bernard Venables, illustrated with colour photographs, mainly by Michael Prichard, and with illustrations by Venables and others, Creel was, and still is, the most highly respected angling journal. It attracted the best writers whose style and ethos are still admired today. Venables is listed on the title-page as Editor until December 1964, then from February 1965 onwards John Nixon is given as Editor and Michael Prichard as Art Editor. (Prichard was mentioned as Photographer and Art Editor from the very first issue, but did not make it to the title-page until after Venables had left). Contents of this issue include:- Leader; Creel diary; Foston trout stream; Sandy forgot the tea by E.L. Matthews; Looking back on the Avon by Lloyd Gladstone Gough; Looking forward: chub in small rivers (part 2) by Jeremy Fry; Sea column by Clive Gammon; Old Charlie by Anthony J. Pearson; Bernard Venables goes fishing; Bass on Sussex beaches by John Darling; Tackle reviews; The wild and the tame by Maxwell Knight; Admiralty charts by Edward S. Walker; Creel colour feature: The quarry and the tactics. Does the fly matter? Arthur Oglesby and David Macnab continue the debate; Mr. Willows; Fixed-spool? Centre-pin? by David Wilberforce; A case for revolution? by T.J. Hartigan; What to see in May by Professor A.F. Magri Mac Mahon; Norfolk tope by Harry Tallent; Creel competition; A greased-line controversy by R.V. Righyni; Biology and the future of fishing by Professor F.J. Trembley; Vision of contentment; Burbot are not extinct by Colin Blake; Photography by Michael Prichard.
£6.00
Availability: In stock
Book Code
45230
Add to Wish List Add to Compare
More Information