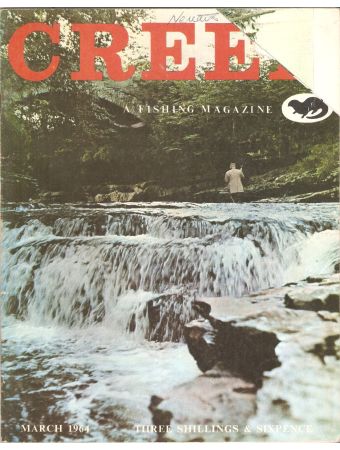 Founded and originally edited by Bernard Venables, illustrated with colour photographs, mainly by Michael Prichard, and with illustrations by Venables and others, Creel was, and still is, the most highly respected angling journal. It attracted the best writers whose style and ethos are still admired today. Venables is listed on the title-page as Editor until December 1964, then from February 1965 onwards John Nixon is given as Editor and Michael Prichard as Art Editor. (Prichard was mentioned as Photographer and Art Editor from the very first issue, but did not make it to the title-page until after Venables had left). Contents of this issue include:- Leader; Creel diary; Bernard Venables goes fishing; Nightlines by A.N. Ballard; Speckled trout by Terry Thomas; Pike and prejudice by Harry Tallent; The March Brown (colour feature) Symposium, by Terry Thomas and Dr. Ian Calvert Wilson; The springer and the kelt by William B. Currie; Mr. Willows; Boat show afterthoughts by Tony Brenna; What to see in March by Professor A.F. Magri Mac Mahon; Thornback ray by Ron Edwards; Flamborough Head by E. Martin; Creel competition; King 'But' by James Wood; Those Irish pike by Toby Sinclair; Sea column by Clive Gammon; Buffalo Bill by L.F. Hicks; Pike of Bosherston by Clive Gammon; Trout of lovely Usk by Lionel Sweet; A centre-pin reel by Lloyd Gladston Gough; Does the fly matter? by R.V. Righyni; Tackle review.
£5.00
Availability: In stock
Book Code
45227
Add to Wish List Add to Compare
More Information